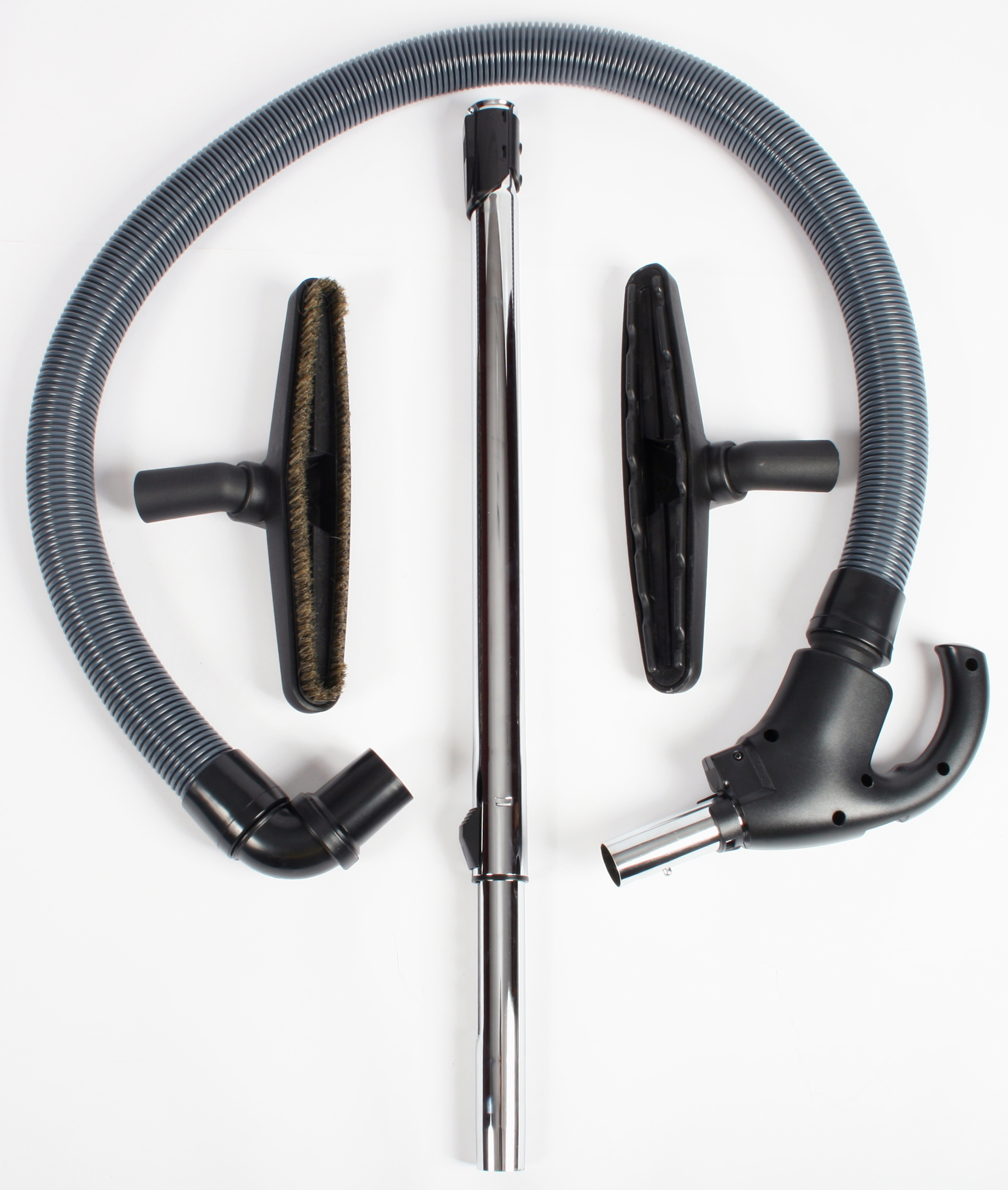 Supplied s-wand was fully extended. The belt and upper body latches were utilized and harness fitted to the user.

At 5 foot 10 inches, the wand was found too short to permit a fully erect posture.  As a result, the body was cast slightly forward, with the weight of the vacuum shifted to the shoulders and lower back. Fitted to a user 6’2”, the wand was definitely too short.  The hose was deemed to be too short resulting in the hose engaging the tank on six different occasions which required stopping to reposition.

The brush on the crossover nozzle created significant resistance on the carpeted surface. To move the tool in either an arc or in a traditional push pull motion necessitated both hands being placed on the wand. This resulted in the upper body tilting forward. In the push pull motion necessary to clean under desks and tables on carpet. The test left one with a feeling of scrubbing as one moved the nozzle. To move in an arc, one is encouraged to tilt the tool to negate some of the contact of the brush to the surface. In a traditional push pull motion the tool seemed to stick to the surface raising the level of effort.

I could see evidence of the brush grooming the carpet surface, but the corresponding effort was significant.

On a vinyl backed walk off mat, the crossover tool sealed to the surface requiring a push and lift motion. Crossover moved freely on hard surface, but noise of the tool to hard surface was unwelcome.

Pick-up with the tool seemed good and the tapered end profile was effective getting under cabinets with limited leg height. A stray paper clip was lifted easily.

The physical effort was high especially during the second test. The forward angle of the upper body put strain on the lower back and added to fatigue. The large diameter wand and s-shape made moving of furnishing to gain access a bit troublesome and required extra movement to accomplish the task. The issue of hose length presented itself most often during these tasks. I became significantly heated up by the effort especially under the harness.

Set up with wand fully assembled. Belt and upper body latches on the back pack locked and harness fitted to user.

The wand fully assembled with the 18” Sidewinder carpet tool stood just above shoulder height with the hose in an arc above head height during use. My posture was erect with body rotation used to create movement in the tool. The tool was slightly tilted as recommended by the manufacturer.

There was significantly less physical effort in movement of the tool across the carpeted surfaces relative to the traditional s-wand and Crossover nozzle. The vertical presentation made it easier to clean against the vinyl coving in halls and room spaces where the coving was present.

The longer wand and movement created by body rotation permitted a comfortable erect posture. The longer wand and pivoting neck permitted cleaning under desks without bending forward keeping the weight of the vacuum over the hips. There was noticeably less stress in the wrist and forearm.

The vertical presentation of the Sidewinder made it easier to access vertical spaces under desks and along cabinets which couldn’t be serviced using the traditional nozzle. The low profile made it easy to clean under low cabinets and displays set on casters without moving them. There were several small square spaces which the 18” length of the tool made access and issue. The longer length was less than ideal on a stair tread although in cleaning the angle created by the tread to riser the tool was very effective.

When cleaning walk off mats, Sidewinder was equally effective. The tool did not lift the mat so there was no need to lift and reposition the tool as with the traditional nozzle.  A stray paper clip was captured by using the tool to reposition it into a vertical position. In the first test this was accomplished in one pass in the second it had to be manipulated twice to capture.

Like the traditional nozzle Sidewinder did require both hands on the wand to be effective in cleaning. Moving furnishings did require stopping to free a hand to create access.

I changed to a hard floor brush for the vinyl tile surfaces. Time was lost executing this task and having to recover the tool on two occasions resulted in lost time.

Set up with the telescopic wand fully extended and locked to the swivel handle. The belt and upper body latches latched and harness were fit to the user.

With the wand fully extended, the angle to the cleaning nozzle was comfortable and permitted easy movement of the tool in the traditional sweeping motion. There was some resistance in movement related to the scalloped shoe of the carpet nozzle, but significantly less than the resistance associated with the traditional nozzle.

The nozzle and handle made it easy to maneuver the tool in tight office spaces. The smaller footprint permitted the tool to be easily lifted into spaces for detailed cleaning not accessible with the longer Sidewinder tool or traditional nozzle. The low profile of the wings provided access under low cabinets and displays.

As with most traditional cleaning tools it was necessary to tilt the upper body forward to clean under desks and tables which shifted the weight of the vacuum onto the shoulders and lower back from the hips. The light weight nature of the tools and hand grip did make detailing in small spaces easier. It was definitely easier to lift and shift the tool with one hand to best utilize the nozzle on related surfaces.

It was very easy to use the free hand to move furniture while continuing the vacuum motion. The lighter weight tool and leverage provided by the handle design made it easier to keep control of the nozzle system.

The 1.25” cleaning tool solution was easily the most effective on stairs.  There was no issue in capturing a paper clip, which was accomplished in both tests with a single pass.  The carpet tool was effective on vinyl walk off mats.

I did change to the floor brush to clean hard floor surfaces. Again, time was lost during transition. It was easier to free the tool and fix the floor brush and to return to the carpet tool than with the sidewinder because of the shorter wand length.

The perceived effort in cleaning the space was less than the traditional s-wand and nozzle. The control associated with the defined grip and lighter tools was judged better than either the Sidewinder or traditional s-wand system. Productivity suffered due to the 12” nozzle, and there were times where the weight of the backpack was felt on the back and shoulders.

In terms of productivity and detailing, the Sidewinder system was most effective. The Sidewinder system permitted an erect posture which we would judge ideal for back pack vacuum use. The longer 1.50’ wand made tool change a bit cumbersome and the 18” tool length did present some issues in small tight spaces. In large open spaces like halls or conference areas there is a definite advantage to Sidewinder use. The width of the 18” Sidewinder tool does present some limitations in capturing large debris.

The 1.25” traditional system would likely be preferred in very tight office spaces. The control and light weight nature of the tools may be preferred by users of smaller stature or accustom to traditional tools. The ability to move objects while maintaining control of the cleaning tools is a positive as is use on stair risers. There is a definite loss of productivity as compared to the Sidewinder.

The traditional s-wand system does do better with large debris and the brush on the Crossover nozzle did groom the carpet surface, which was lacking in the Sidewinder and 1.25” carpet nozzle. The shorter and larger diameter wand forced more of a stooped posture, and the body rotation motion was found a bit unnatural as compared to the Sidewinder, which encouraged an erect posture. There was no visual evidence of superior cleaning attached to the 1.50” diameter and the increase in effort was noticeable.